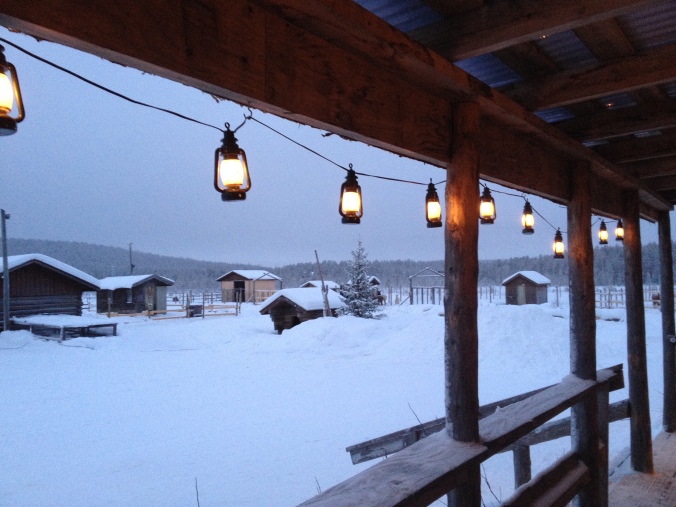 HBO has copyrighted the phrase “Winter is coming”. How selfish is that? But then again, it seems like we do not really need that phrase as nowadays everyone seems to be just saying “Winter is late”. Finland got snow early in November but it all vanished before the winter really even begun. Birds started to sing and willows were trying out their spring outfits. Not okay.

Luckily Finland reaches far to the North way beyond the Arctic Circle. You can always relay in Lapland. Enter the train in Helsinki and after an uncomfortable night in a small cabin with a bunk bed and an orange sink, you wake up in Lapland surrounded by snow and darkness. 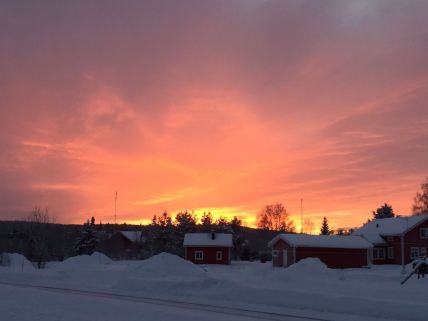 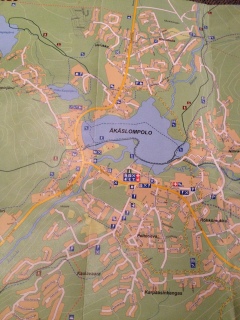 Äkäslompolo in Ylläs is a bit touristic holiday destination nowadays. However, it is quiet and beautiful: small houses, two roads, a frozen lake and a starry sky. A fine place to spend midwinter. We (a combination of 4 families) arrived on the Christmas Eve ready for a cosy holiday. The hired cottage got a festive atmosphere when the Christmas tree was brought in and candles lit up. As there was approximately 3 hours of daylight and 20 minutes of sunlight a day, it was important to have a comfortable place to spend the remaining time by reading, playing games and, of course, eating. We had the first Christmas dinner with fish, casseroles, meats, rosolli and all the other traditional treats, at a local restaurant Rouhe. Second, homemade dinner, lasted for three days and filled the stomachs of hungry skiers. 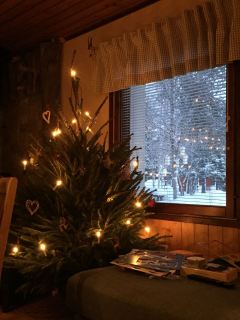 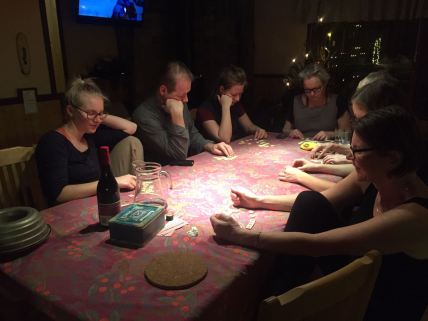 Ylläs has a good cross-country skiing network that goes around the lake and fjells. The route maps are rubbish though, and the signs guide the way to the places that are not shown on the map. Nevertheless, the tracks were in excellent shape and skis glided brilliantly. Even my American friend, Ethan, enjoyed cross-country skiing of which he tried for the first time in his life. The swishing of the skies in a quiet wintry forest is amazingly relaxing. 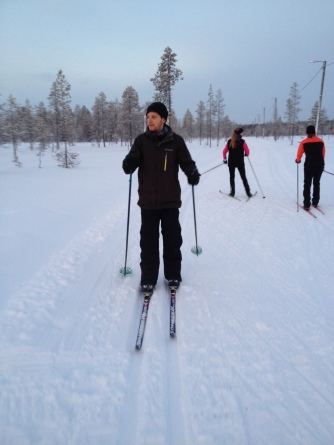 Trying out the skis

The tracks are kept in good shape ©Ethan

There are also paths for snowshoeing. At least the path up to Kuer-fjell is good and well marked. The view over the village and lake from the top is beautiful. Those who want the view but no exercise can go up to the top of another, higher fjell, Ylläs, with a gondola lift. Ylläs has also downhill skiing slopes offering more excitement. If the weather is mild it is a good place to do some snowboarding or skiing. However, it can get very cold in mid winter (down to – 30C) and the wind can be very rough on the top, blowing the snow and blocking the visibility. 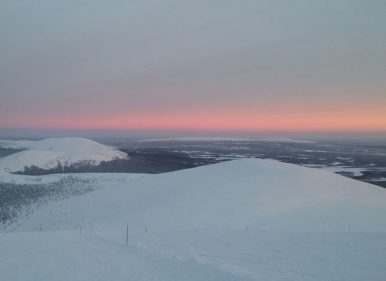 View from Ylläs and the sun that barely rises 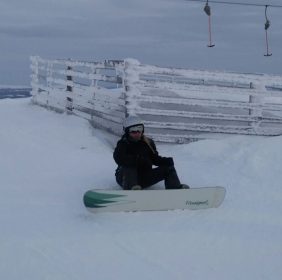 All the slopes were not yet open at Ylläs

If the cold is not an issue rolling in the snow or taking a dip in an ice cold water are things to try. We hired a proper sauna for one night (our cottage only had an electric sauna and that is not good enough for us). The sauna was sitting by the lake, preheated and ready to take in 15 people. Warmth crept first to the toes and gradually to the heart. When the sweat was running down the back, it was time to sneak out, walk on the snow to the icy ladder that vanished into a large hole in the ice. Ice swimming (or dipping if your hands refuse to let go of the handrailing) is a Finnish thing. Possibly mental but absolutely wonderful tradition. Dipping into frigid water in the middle of winter might not sound fun, but it does feel great. The blood circulation gets a boost and the whole body feels fresh.

Once again Ethan decided to be brave and had a try. He was rewarded with the most amazing way. When he was getting up from the water, gasping and shivering, he looked up to the sky. Northern lights were drawing their fresh green lines in the horizon. Soon after the sky was lit up with the dance of the Auroras. 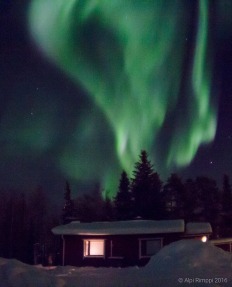 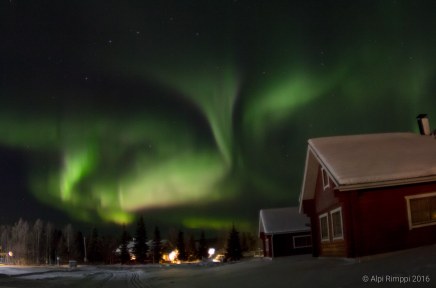 Now the winter has finally arrived in the South as well. Snow fell a few days ago, temperature touched -23C and the water pipes in the Sauna building are frozen.

6 thoughts on “Winter in the North”

I updated my blog. A night in the woods alone was inspiring enough to make me write a blog post, link is still in the bio.
I wrote on my blog a few weeks back that I have little time or motivation to write outside of work. This is one reason why I’m so busy: Somehow I’ve ended up teaching this aerial stuff as well.
Shoes have new edges! I had wanted to go back to this crag all summer and finally had the time to make my way there on Friday. I didn’t climb anything noteworthy but it was a lovely, hot day :)
This was fun 7a, master of vänster. Took me on session last week force my head be okay with the ending (6c) so today was easy even without spotters. Only fell off my wee pad once. I did two endings for this and this one might have a wrong foothold at the end but I didn’t film the other one… I don’t care
Follow Near Here Way Away on WordPress.com
Loading Comments...
%d bloggers like this: