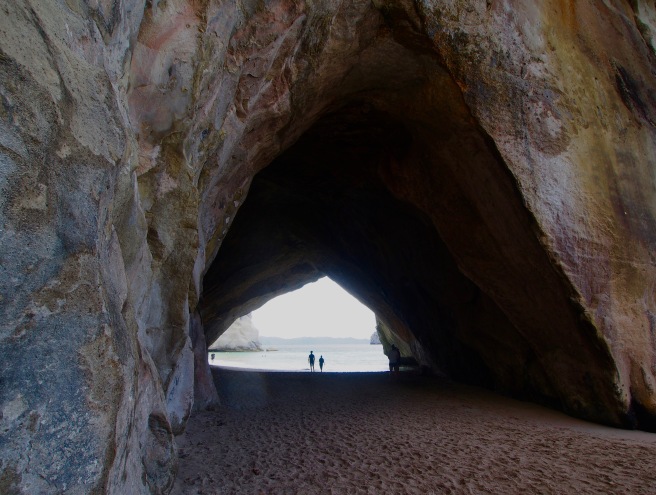 “Did you see it? Was it still there? So awesome! I mean so awesome!” A young American guy shouts at his friend as she gets up from the water. She takes off her mask and fins and smiles widely, “Yeah, it was amazing! I have never seen a ray before”.

On the east side of the Coromandel peninsula is a town called Hahei. It is a small one, but somehow it feels bigger than Coromandel town which on the map is about three times larger. Maybe it is the amount of tourists that come and go. The tourist magnet is the Cathedral Cove. The cove, familiar to some from the Chronicles of Narnia: Prince Caspian, is only a short walk away from the town. 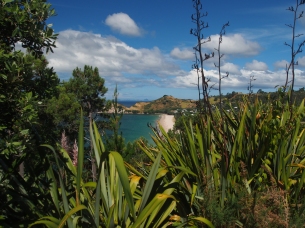 The view from the path 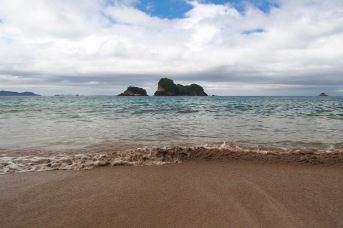 the sea is blue and turquoise

Signs in the beginning of the path give an estimate of 1.5 hours to the Cove. Maybe it takes that long with high heels and a walking stick, but an average person gets there faster. Sturdy, partly paved path climbs over the hill and follows the shoreline. The path passes by two smaller beaches which are recommended snorkelling spots. We stop by the Gemstone bay. It is a boulder beach, not very comfortable for sun bathing, but interesting below the surface. It is within the Whanganui-A-Hei marine reserve which protects the marine ecosystems on the area. The signs on the shore as well as on the buoys on the water have information on the habitats and the species found underwater.

Water is surprisingly cold, the winds have been bringing colder water in recently, but after the first shock the body gets used to it. We hired snorkelling gear form the local diving shop for the day ~25AUD/set. Green and blue, big fish, small fish, striped fish, funny fin fish… Plants and sea urchins. And then I see it. A dark blue stingray glides underneath me. It swims slowly making a big circle. I follow it. Stingrays don’t sting unless they are annoyed. But still, creepy. And so beautiful. 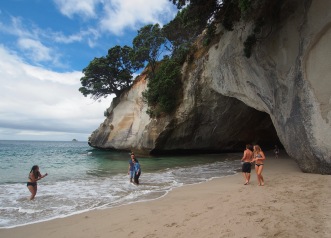 You can walk through the cove 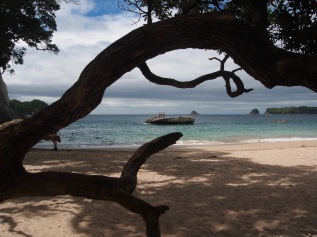 The other beach before Cathedral Cove is called Stingray Bay. Now I get the name. The idea of being surrounded by a whole bunch of rays is a bit nerving so we continue straight to the Cathedral Cove. High smooth walls arch towards each other creating a triangle shaped walk-through cove. The sea on the other side sparkles and the silky sand slides underneath toes. Long beaches on both sides of the cove are dotted with people sunbathing, swimming and taking photos. Despite the people, the area is calm. No loud noises, no bright signs. No shops, no cafes. Just nature. Stingrays have chosen a good place to chill.